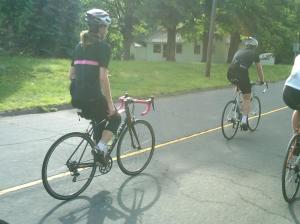 Did you know that ballet technique is one of constant tension?  It is a vocabulary of seeming effortlessness born of pushing into the floor while pulling up out of one’s entire body.  Is this one side against the other or an ideal and sustainable harmony?  Both, either, many formulations of each possibility at different times.  We have all read the “this is war” accounts of bike races. Similar can be written about ballet and here is likely where, for me, my love of cycling began; this line where struggle and perfection meet.

In a recent photo essay on New York City Ballet, there was a reference to covering the backstage life of ballet as being similar to covering war (http://www.nytimes.com/slideshow/2012/12/30/arts/dance/20121230_NYCB.html?ref=dance).  How this is so is confounding at first but makes sense as more a reference to how similarly the scenes unfold in the covering of them than actual war–the comaraderie, the daily travails and the constant vigilant focus.

I wonder what it is that makes us watch these battles?  Cycling shows us crashes and injuries.  It shows us the dilemmas of training and competing at all costs.  Ballet shows us athletic prowess but only under the face of gracefulness, a less visible battle.  For me, dancing is far less interesting on stage than backstage.  In the backstage version, the “I am covering war now” we do see all sides of the battle.  The best side being laughter among a very close knit and unusually focused group of people.  The worst, wrecked up bodies waiting to heal and emotional fraying over endlessly high standards of performance.  There are no damaged bikes along side dancers though to give us a true visual of the toughness of ballet and the extremes of what is accomplished there.

In cycling, I fell in love when I heard a phrase on a Rapha video that is similar to the one in the recent photo essay on City Ballet, “It’s war all day long.”  The Rapha video is black and white, a mini-homage to the Paris-Roubais (http://www.rapha.cc/roubaix-recce-into-the-fight).  And in it, there is the idea of struggle made very visible, struggle that is less about winning an actual race and more about simply going for it.  It ends, like the ballet photo essay, with a close knit group of determined and focused people laughing.  I could watch it all day long, this pushing and pulling of technique that is cycling, that is making oneself press onwards, for the love of it. It’s possible, that the three minutes or so of that video made me fall in love with cycling.  Everything there is to love about the battles in cycling–the peace of winning one’s own private races, of finishing a ride, of mind over body, of body over mind–is all well captured there.  It is a backstage view, more interior, and maybe more telling then the wreckage of bikes and crashes.  Emily Gresh